“We are passionate about treating our patients”

What is vocal cord (fold) paresis and paralysis? 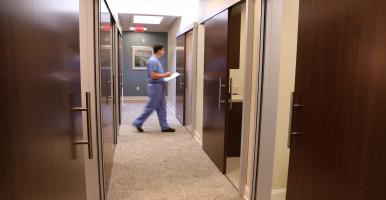 Paresis/paralysis can happen at any age, from birth to advanced age, in males and females, from a variety of causes. The effect on patients may vary greatly, depending on the patient’s use of his or her voice: A mild vocal fold paresis can be the end to a singer’s career, but have only a marginal effect on a computer programmer. If you notice any change in your voice quality, immediately contact an otolaryngologist head and neck surgeon.

What is the treatment?

The two treatment strategies to improve vocal function are voice therapy (like physical therapy for large muscle paralysis), and phonosurgery, an operation that repositions and/or reshapes the vocal folds to improve voice function.

Voice therapy is normally the first treatment option. After voice therapy, the decision for surgery depends on the severity of the symptoms, vocal needs of the patient, position of paralyzed vocal folds, prognosis for recovery, and the cause of paresis/paralysis, if known.

What nerves are involved?

Vocal fold movements are a result of the coordinated contraction of various muscles that are controlled by the brain through a specific set of nerves.

The superior laryngeal nerve (SLN) carries signals to the cricothyroid muscle. Since this muscle adjusts the tension of the vocal fold for high notes during singing, SLN paresis and paralysis result in abnormalities in voice pitch and the inability to sing with smooth change to each higher note. Sometimes patients with SLN paresis/paralysis may have a normal speaking voice but an abnormal singing voice.

The recurrent laryngeal nerve (RLN) carries signals to different voice box muscles responsible for opening vocal folds (as in breathing, coughing), closing the folds for vibration during voice use, and closing them during swallowing. The RLN goes into the chest cavity and curves back into the neck until it reaches the larynx. Because the nerve is relatively long and takes a “detour” to the voice box, it is at greater risk for injury from different causes infections and tumors of the brain, neck, chest, or voice box. It can also be damaged by complications during surgery in the head, neck, or chest, that directly injure, stretch, or compress the nerve. Consequently, the RLN is involved in the majority of cases of vocal fold paresis/paralysis.

What are the causes of vocal cord paralysis?

The cause of vocal fold paralysis or paresis can indicate whether the disorder will resolve over time or whether it may be permanent. When a reversible cause is present, surgical treatment is not usually recommended, given the likelihood of spontaneous resolution of the problem. Despite advances in diagnostic technology, physicians are unable to detect the cause in about half of all vocal fold paralyses, referred to as idiopathic (due to unknown origins). In these cases, paralysis or paresis might be due to a viral infection affecting the voice box nerves (RLN or SLN), or the vagus nerve, but this cannot be proven in most cases. Known reasons can include:

Inadvertent injury during surgery: Surgery in the neck (thyroid gland, carotid artery) or in the chest (lungs, esophagus, heart, or large blood vessels) may inadvertently result in RLN paresis or paralysis. The SLN may also be injured during head and neck surgery.

Complication from endotracheal intubation: Injury to the RLN may occur when breathing tubes are used for general anesthesia or assisted breathing. However, this type of injury is rare, given the large number of operations done under general anesthesia.

Tumors of the skull base, neck, and chest: Tumors (both cancerous and non-cancerous) can grow around nerves and squeeze them, resulting in varying degrees of paresis or paralysis.

What are the symptoms of vocal cord paralysis?

Both paresis and paralysis of voice box muscles result in voice changes and may also result in airway problems and swallowing difficulties.

Swallowing problems: Choking or coughing when swallowing food, drink, or even saliva, and food sticking in throat.

An otolaryngologist/head and neck surgeon conducts a general examination and then questions you about your symptoms and lifestyle (voice use, alcohol/tobacco use). Examining the voice box will determine whether one or both vocal folds are abnormal, and will help determine the treatment plan.

Laryngeal electromyography (LEMG) measures electrical currents in the voice box muscles that are the result of nerve inputs. Looking at the pattern of the electric currents will indicate whether there is recovery or repair of nerve inputs and the degree of the nerve input problem. During the LEMG test, patients perform a number of tasks that would normally elicit characteristic actions in the tested muscles. Because a wide list of diseases may cause nerve injury, further tests (blood tests, x-rays, CT scans, etc) are usually required to identify the cause.